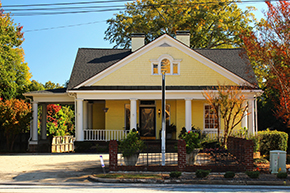 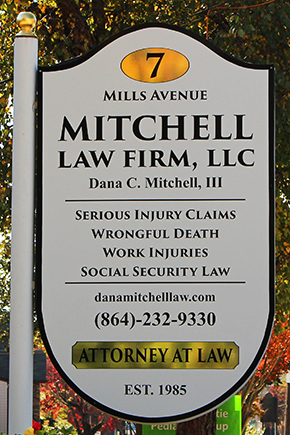 The Firm was founded by Dana C. Mitchell, III on January 1, 1985, and has been in it’s present location for 33 years.

Principal and founding attorney, Dana C. Mitchell is listed as AV® PREEMINENT™ (highest rating for professional excellence) in Martindale-Hubbell’s Peer Review Ratings. He is also listed in Woodward/White’s Best Lawyers in America (2006 – 2018)(Personal Injury Law) and in South Carolina Super Lawyers (2010 – 2018) (Personal Injury, Workers’ Compensation), and is an Advocate in American Board of Trial Advocates.  He was admitted to the U.S. Supreme Court in 2011.

Dana Mitchell was born in Bryn Mawr, Pennsylvania, but grew up in Columbia, South Carolina.  He is one of eight children.  Mr. Mitchell was educated in the public shcools of Columbia and later attended both Clemson University and the University of South Carolina, where he graduated in 1973.

Mr. Mitchell is married to the former Frances Lynne Wallace.  They have four grown children and five granddaughters.

When Mr. Mitchell is not practicing law, he enjoys time with his family, golf with friends and family, gardening, and vacationing in the North Carolina mountains and Pawley’s Island, South Carolina.